The Art & Science Interaction Lab is a modular research facility to effectively realize, analyze, and test AR and VR experiences. It is located in the brand-new building ‘De Krook‘ in the city center of Ghent. The 10x10x6m room is equipped with state-of-the-art audiovisual equipment, motion tracking and  two EEG headsets. This infrastructure enables investigating, bringing and measuring a multitude of interactive AR and VR experiences.

The Art & Science Lab is a collaboration between three Ghent University research groups (IDLab-MEDIA, IPEM and mict) and is funded under the medium-scale research infrastructure program governed by the Research Foundation – Flanders (FWO).

The Art & Science Lab serves as a central hub between several concert halls in Ghent. In more detail, the facility is connected with 10Gbps fiber to ‘De Vooruit’, ‘De Minard’ and ‘Het Wintercircus’ enabling interaction between those facilities. Such connection enables, amongst others: 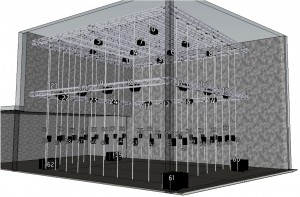 Within the Art & Science Lab, a dedicated audio wave field synthesis system has been installed and calibrated. This system allows to project audio into 3D space by use of wave field synthesis. Such a system brings the possibility to (re-)position each audio track within a multi-track recording in real-time.

The system consists of:

A high-end Qualisys motion capture system allows (full) body tracking with infrared markers and cameras. The cameras can be re-positioned within the room to fulfill any kind of motion capture demand. Practical applications include, but are not limited to:

In the future, the amount of cameras will be increased to allow for a denser coverage and less camera occlusions.

Within the Art and Science Lab, two high-end (mobile backpack) EEG systems allow to track and measure the impact of stand-alone as well as interactive experiences on the human brain as well as to create unique immersive experiences based on real-time biofeedback.

Practical applications include, but are not limited to:

The current EEG system consists of: 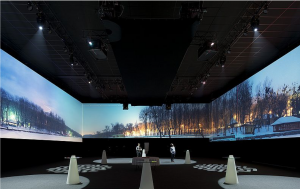 Projection will allow high-end immersive visualization within the Art & Science lab. The ultimate goal is to immerse people into the environment by triggering all  senses, of which vision is of utter importance.

The visualization setup will consist of:

Selected posts related to this infrastructure: